One question I get asked a lot is “how long do the batteries last?”
Batteries fail very slowly at first, then they seem to shrink until you replace them.

In the summer when there is enough sun to recharge them everyday, even marginal batteries seem endless. We really find out how they are doing in the winter with weeks of rain and cloudy days without sunshine. My current set are starting to feel the strain, so some weeks I get to carry gas cans.

A Word About Generators

The most important thing I’ve learned about generators is how to turn them off. There’s an electrical switch and a fuel on/off. Most servicing is for gummed up carburetors – gas left in the works dries out and becomes the gunk in all the tiny parts in the carb. So I turn the fuel off and let it run dry. Less gas leftover keeps the carb clean between uses. Ready when it’s needed again. “Mechanic in a Bottle” is good too.

How Batteries Work and Fail

The kind of batteries we use for off grid systems are the sulfuric acid in a plastic box with lead plates. The plates are porous, a bit like sponges with a very large surface area exposed to the acid.

In the discharge phase, useful power is released as the acid dissolves the surfaces of the plates. Lead ions go into solution with the acid, and extra electrons head to the terminals to do our work. In the charging phase, power is put into the battery, extra electrons push the lead ions out of solution and back into the plates.

Water vapor can escape during charging, so it is important to make sure the water level stays high enough. The liquid should always stay above the plates, and only distilled water with no minerals can be used to fill the cells, up to a line marked by the manufacturer. The plates can be damaged by letting any portion go dry. An oxide forms on the parts exposed to air. As if the batteries had shrunk, that portion of the capacity won’t come back. There are vapor recovery caps that let the water drip back into the battery instead of escaping, but they seemed expensive last time I checked. 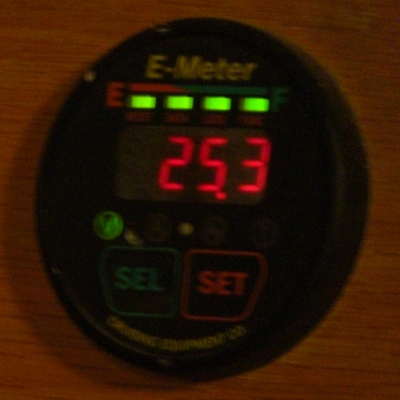 This is a great little meter from Cruising Equipment. It works fine on a 24 volt solar systems, even if it thinks my house is a boat. It shows:

The Accumulated Amp Hours may seem upside down at first, but the directions do make sense. Full charge is zero, then amps hours subtract. The negative number grows down as discharge continues. Charging “fills in the hole” and the accumulation increases towards full at zero.

Each battery design has a maximum number of deep charge/discharge cycles rating. The plates get a sort of metal fatigue after too many cycles. Shallow cycles are much less damaging, so larger systems tend to last longer.

A new battery might have a daily usage only 20% its capacity, barely counting as a cycle at all. While an old battery with shrunken capacity close to the daily usage might be doing a full charge cycle every day, and accelerating its own decline.

At here’s what they cost over the years:

A definite bump for better batteries and the price of lead, but still quite reasonable over the long term. My normal usage now averages about 100 AH per day, or a 15% depth of discharge. In the early years those cycles are essentially free, as it might take a week of shallow cycles to add up to one deep cycle. 500 deep cycles is less than 2 years if 50% or more capacity is used every day. They will last a lot longer if the total AH capacity is a multiple of the daily usage. 7 years is over 2500 days, so clearly not every day was a cycle.

The above layout doesn’t take much space but it’s hard to maintain. I need to use a mirror and a flashlight to see the water level in each individual cell. A flatter design would take up more room, but maintenance would be easier if you can quickly see and pour into the cells. They might have lasted even longer if the maintenance had been easier.

This entry was posted in home and tagged batteries, generator, solar. Bookmark the permalink.