I’ve long been a laptop user. They tend to be more efficient with power usage. In the early days before I had enough solar panels, that was an important detail. I still don’t have enough power to leave a large desktop system running 24/7.

Amongst the detritus in my desk is this card, which I wrote 20 years ago. “The one to beat July 1993″ was my estimation of the very best laptop available at that time. The Toshiba T4600C had a 9.5” active matrix color screen! Color was pretty rare back then, and they commanded a pretty steep price premium $1600 over the monochrome (grayscale) model. You probably could have bought a cheap car for $4700 in 1993. 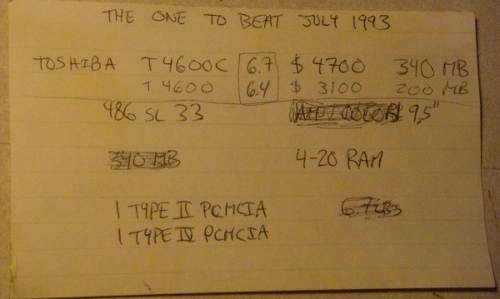 PCMCIA slots (the pre-cursor to PC-Cards and Express slots) were very important then, as they allowed you to get a modem and ethernet. Dial-up was the only way to communicate over long distances, as DSL, cable modems and WiFi didn’t come along until later.

Nowadays I carry one of the early Lenovo S10 models – the one with the matte screen – the newer shiny screens may be good for watching videos, but I think they are terrible for writing and programming.

The T4600C had a 340 MegaByte drive, and came with 4 MegaBytes of RAM, expandable to 20MB. Yes, Windows (3.1?) and an application or two used to run in 4 MegaBytes. You can configure a tiny Linux system to do that, but nothing from Microsoft will even load in that little space today. My Lenovo has 2GB of RAM and I put in a 180GB SSD drive. Aside from the SSD speed advantage, the disk space is a factor of 500 times, and the RAM about 100x.

The 486SL33 ran at 33Mhz built in a 1 micron process (the width of the silicon lines). The 1.6Ghz Atom CPU in the netbook is about 50 times faster just in clock speed. The Atom is built with a 45 nano-meter process, about 22 times finer. But that number needs to be squared to get the true picture – there are 500 times more gates in the CPU, yielding a good deal faster architecture even for the same clock.

2.7 lbs (1.2 kg) is light enough to carry around all day, 6.7 lbs (3 kg) was not. And as we’ve come to expect from technology, the newer, faster, lighter machine costs about one tenth as much as the older one.

This entry was posted in home and tagged computer, tech. Bookmark the permalink.