I recently attended my first course at the Front Sight Firearms Training Institute about an hour west of Las Vegas. There was a short reference at the welcome talk to the sad situation in Connecticut the week before, but since every one needs to pass a background check before they can attend any course, the feeling was that those events had little bearing on our training.

Beyond the physical skills, there were lectures on mental awareness, morals and ethics of using firearms, criminal and civil liability, basic tactics. Dedicated professionals guiding us through lots of difficult topics to think about.

On the first day, everyone needs to get there by 6:30 am for check-in, though in December, the sun doesn’t come up until 7, so it’s still dark. The week I was there it got down to freezing and only briefly up to the mid 50’s with wind, overcast, sun and even some rain. Last classes ended at 6pm, an hour after dark. That’s dawn to dusk outside for 4 days with a few hours for lunch and lectures. Not on my feet the whole time, but the days were fairly exhausting.

Most of the handgun students have unloaded weapons holstered on their belts while walking around and in classes and at lunch. And while people with an irrational fear of guns may be panicked with a mental picture of over 400 men and women, aged 16 to 80, in an undisciplined mob of gun nuts randomly firing in every direction, nothing could be further from the truth. I’ve rarely felt safer.

No one but uniformed range staff is actually walking around with loaded weapons in their holsters. All of the student firing is done as part of well controlled drills. Every action is done on an instructor’s command. Safety first and last. 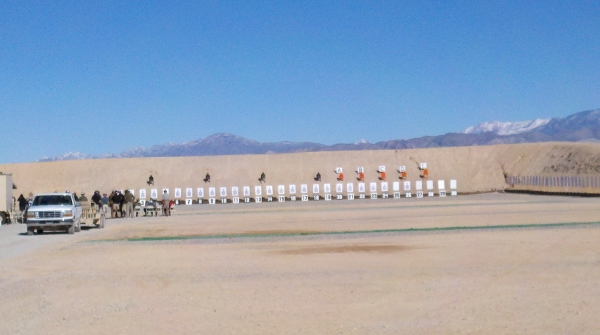 Our 4 day rifle class had about 50 people and a third of them were prior or current military. An Army Special Forces and a Navy Seal, a group heading into the Nevada National Guard, a few police and fire fighters, all used the course as a refresher. The rest were hunters and target shooters, etc. One 16 year old, several pairs of brothers and one couple. Most were shooting AR-15s, two had ARs in 308, there was an AK-47 and a bolt action 30-06.

There were 4-6 instructors on the range at all times. The lead instructor did 2 tours in Iraq with the US Army and 2 more in Afghanistan with the NV Guard. Three of the others were either Iraq or Afghanistan vets. All were very good at teaching gun safety and the handling and shooting techniques of the course. We practiced shots at 3, 15, 25, 50, 100, 200 and 400 yards.

The 50 students were divided into 2 relays. The lead instructor is behind the line of students shouting commands, so it does seem sort of like boot camp to a civilian, but you have the option of sitting out any exercise, and no one tells you to do pushups as a punishment. Certainly no one is barking insults in your face. Everyone is trying to help everyone do their best. Any safety lapse however will get quick personal attention. Students are encouraged to watch out for safety and help each other.

The targets are all silhouettes with thoracic cavity (upper chest area) and head boxes. I found this a bit morbid, since I mostly shoot at pumpkins and paper targets with circles, but these instructors are combat veterans. When they teach you how to clear a malfunction, the emphasis in on proper technique and speed so you can get back into the gun fight and kill the enemies shooting at you.

The first important thing to learn are the 4 basic rules of gun safety:
1) always treat every gun as if it is loaded.
2) never point a gun at anything you are not willing to destroy.
3) keep your finger off the trigger until you are ready to fire.
4) know your target and what is behind it.

The first half of the first day, no one shoots anything, just lots of practice with carrying positions, ready positions, and transitions between them with constant emphasis on muzzle discipline, which is #2 above – your rifle is always pointed in a safe direction.

There are two ways to sling the rifle for carrying – muzzle up or muzzle down. And 3 kinds of “ready” – standard ready, high ready, field ready. In all of these positions the rifle’s safety switch is on, the students finger is straight out, not contacting the trigger, and the muzzle is pointing mostly forward toward the target at a slight angle.

On the 1st and 2nd day, firing exercises are not timed. On the 3rd day, they start timing them and on the 4th day there is a skills test where everything is timed and scored. Time includes movement from the ready position, aiming and firing.

Every time the rifle is fired is part of a firing drill with an instructor giving
detailed commands. There is no random free form fire at will.

“RELAY ONE FACE DOWN RANGE”

move into position for standing, kneeling, sitting, squatting, lying prone, etc.
All foot motion should be stopped before the ready command.

“FROM THE FIELD READY”
“PRESS” – Push the safety switch to FIRE, mount (pull the rifle into your cheek), aim and smoothly pull the trigger. Hold for a second, rifle comes back down, look both ways, and set the safety to SAFE.

Or for live fire:

“RANGE IS CLEAR”
“FIRING DRILL” – time to insert a magazine, safety is set to SAFE.

“LINE IS SET”
“FROM THE HIGH THE READY”
“FIRE” – Push the safety switch to FIRE, mount (pull the rifle into your cheek), aim and smoothly pull the trigger. Hold for a second, rifle comes back down, look both ways, swap magazines and set the safety to SAFE.

This repeats for 3 or 6 shots with variations of the 3 ready positions and then stops.

“END OF DRILL”
“SAFETY ON AND UNLOAD” – take out the magazine and empty the chamber
“UNLOAD”
“CLEAR AND SLING” – chamber check, magazine check
“WHEN SLUNG, TURN AND FACE” – at this point no rifle is loaded

After a few hours of this routine, it becomes second nature. You wouldn’t dream of moving your muzzle away from down range until it was unloaded, with a clear chamber, and no magazine. Then it moves up or down to the vertical safe direction, then properly slung. Then you can turn around to face your relay partner.

When the whole line is facing back away from the targets with rifles slung,
the instructor will tell everyone in that relay:

“RANGE IS CLEAR”
“CHECK AND TAPE”

The half of the students who just shot will walk down the range to check their accuracy and cover those holes with tape, while the next half get ready for their turns.

Everyone who went down the range to check comes back, with an instructor doing a sweep being the last to get back, to make sure no one is left in font of the firing line, and the process starts again. It takes a while for each pass of the shooting drills to be done, but the rigid discipline of loading and unloading, clearing the rifles and the range, ensures that everything is done safely.

There’s obviously much more to a 4 day class, but this should give a general idea of what to expect. I had a lot of fun, learned a lot and will definitely come back for more courses in the future.

This entry was posted in travel and tagged guns, Nevada, travel. Bookmark the permalink.