These are used to remove excess wax from the frames that fill honey bee hives.

Most of the links to solar wax melters point to the same design, from some universtiy or Ag Extension. It’s large enough to hold a handfull of deep frames. It’s much bigger than what I needed for occasional old frame cleanup and chunks of burr comb. I’m OK with leaving it out for a few days.

This one is built from a standard medium height 10 frame hive box,a large non-stick broiler pan, and a sheet of glass in a wood frame. 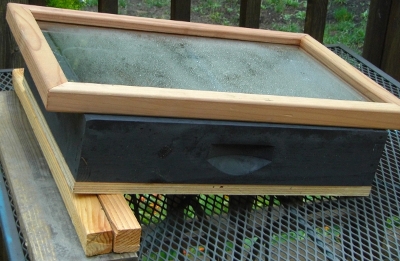 It’s painted black inside and out to promote heat absorption, and has a flat bottom with a piece of foam to insulate the pan. It probably wouldn’t be hard to add a stand, but I just prop it up on a table. The screen works as it is, though it certainly could be better shaped. I had to wrestle a bit to break it loose of the wax. 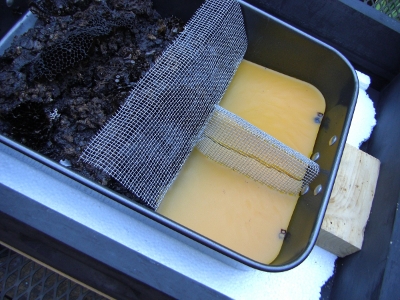 I took out the collected wax and let the rest bake in the sun. After a few days, there was no more additional yield. Then I washed out the pan and ran the chunks of wax through the same process again to remove the bits that got through the screen. The wax color gets a little lighter each pass.

This entry was posted in home and tagged bees, solar, tech. Bookmark the permalink.