This blog started on the way back from my Oct’12 trip to Vermont for the fall foliage season. In the spring, it’s skiing and visiting family for birthdays.

We visited the Cabot cheese factory, in the town of Cabot and took their factory tour. This is the place if you like extra sharp cheddar cheese. 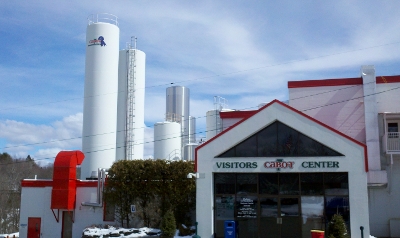 They show a 10 minute video which tells the story of the Cabot Cooperative, started 100 years ago, and now collecting milk from farms in Vermont, Mass and New York state.

Those towers hold a million pounds of milk. Milk is sold at wholesale by the hundred weight, 100 pounds or about 12 gallons. It arrives every day of the year in trucks, 40,000 to 80,000 pounds at a time. The million pounds in the silos lasts for 3-4 days of production, also 364 days per year.

Vermont being a diary and tourist state, has a simple rule to govern the order in which roads get plowed when it snows. It snows a lot in Vermont. Since cows don’t take holidays, the milk routes are first, then the schools, then the skiiers, then the smaller local roads.

Years ago, I took the longer Tillamook tour in Oregon, home the mild cheddar famous on the west coast, so I already had some idea of how cheese is made on a grand scale. They heat the milk, add cheese cultures and enzymes, then stir it in huge tanks as the curds form and separate from the whey. In the old days the whey was just discarded, as no one but a few pig farmers had any idea what to do with it. Now it’s the basis of a new industry making protein supplements, bars, shakes, etc. Once the whey is drained from the tanks, they pull the curds out with an auger in the bottom of the tank, and compact the cheese into large blocks. The blocks are vacuum packed, boxed and sent to the aging warehouse for 90 days to 2 and sometimes up to 6 years. The flavor sharpens over time, so the mild varieties are the 3 to 6 months, and the sharp ones are 18 to 24 months. Over 2 years are extra sharp and special vintage varieties.

I skied one day at Stowe, but no pictures because it was snowing and nearly a white out. The snow seemed much wetter and heavier than the higher elevation (3000 vs 8000 ft) Sierra snow I’m used to. I did get to re-visit the Mountain Chapel on the Toll Road trail – imagine this without the leaves, all covered in white: 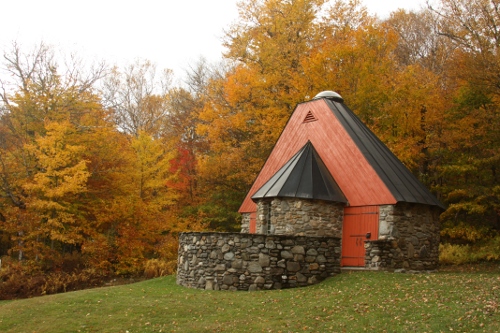 This entry was posted in travel and tagged Vermont. Bookmark the permalink.